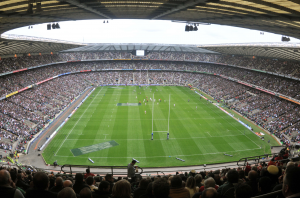 Can you recall such an occasion in rugby that has caused such a stir in the professional game…?!

With everyone seeming to have an opinion on all forms of Social Media recently, to what I will refer to as #Ruckgate, about the events at Twickenham in Round 3 of the RBS 6 Nations has sparked a global debate within the game between players, coaches, pundits and fans, and for many, scrambling to dust off their LAW books…

With the dust now settled, I will aim to provide an objective analysis to #Ruckgate rather than bring another subjective opinion about the events that unfolded on this eventful afternoon. The match was between the tournament’s favourites, England, and Italy who the week before were having their place in the tournament come in to question and whether or not they deserve their place in the oldest rugby tournament in the world. 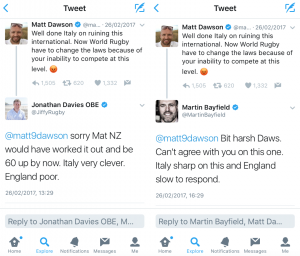 Scenarios from the match 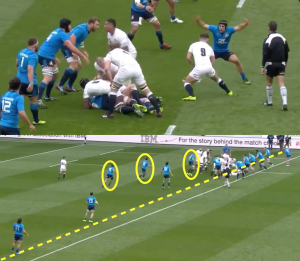 Here is the referee clarifying the LAWS in the middle of the game… https://youtu.be/3kFAEJgZ1oE

The key aspect to emphasise here is “who are on their feet, in physical contact”.

Here is a good explanation of the law…

Number of attacking players sent into the #Ruckgate area

With the #Ruckgate NO Rucks, I analysed how many players where sent into the #Ruckgate area on each occasion, which did not include the ball carrier or the “scrum half”. 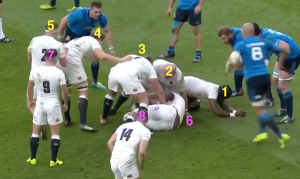 Number of occasions the #Ruckgate tactic was employed

From this table you could argue that England never had the tactic in their toolbox, whereas Italy used the #Ruckgate tactic only on selective occasions in both halves.

But it did work at other times and led to Italy scoring a try, causing England to make mistakes or give penalties away and forcing England to kick to kick the ball away… thus resulting in an Italian Lineout in the English half or a Counter Attack… with both Possession Platforms having a very high chance of resulting in a try being scored (N.B. based on the data from my ongoing Try Scoring Trends Research Project)

It would be interesting to research WHERE the Italy #Ruckgates occurred…

How long did it take to England to recognise what Italy were doing…?

How long did it take for England to change their tactics at #Ruckgates…?

How many times did England pick and go…?

When was the first time England picked and went…?

How many times did England players pop the ball from the floor when tackled to the ground…?

When was the first time an England player did this…?

How many times did England offload out of the tackle…?

When was the first time an England player offloaded out of the tackle…?

What tactics could you employ to combat the #Ruckgate tactic…?

Offload out of the tackle:

Offload from off the floor:

Ball carrier on floor gets back to feet and goes again…:

What was the “game winning” factor…?!

Did giving away penalties at the #Ruckgate have a bearing on the outcome of the match…?!

These matches are labelled as TEST matches…

During the week after the match I posed four questions on my Twitter feed based on one of Connor O’Shea’s comments, i.e. “Rugby is a game of chaos”, after the game…

Italy won the 1st half 10-5: Italy #Ruckgates totalled 62 compared to 49 #Ruckgates for England.

England won the 2nd half 31-10: England #Ruckgates totalled 55 compared to 34 #Ruckgates for Italy.

Murray Kinsella’s article in ‘The 42’:

Murray Kinsella’s article in ‘The 42’

…as World Rugby are going through their process of LAW trials currently in the 2017 Americas Rugby Championship… In essence there would be no more #Ruckgates.