So much is out there on “Culture” it is sometimes hard to know where to look and what to look for…?! A quick Google search brings up 4,920,000,000 results when you type “Culture” into the search! Everyone these days bangs on about “Culture” everywhere you go and say how important it is but how many people actually know what it is, how to do it and what it looks like…?!

I am in a very fortunate and privileged position having travelled the globe in my search for new knowledge, new experiences and new challenges to share with you what I have either done with my rugby teams at different levels, with my pupils in Physical Education lessons in different environments, or observed in the most successful rugby environments (the Crusaders from NZ and Fiji 7s) or the most expensive schools in a country in different cultures.

Therefore I feel I can bring and offer a unique insight to this debate backed up by the research that is out there. This week I use the following research article as my foundation and the preparation that I did for the Keynote presentation I made on Athlete-centred Coaching at the Ohio University Global Coaching Seminar:- 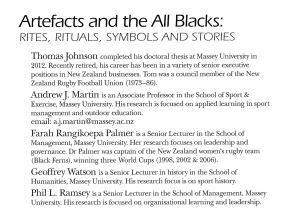 “In essence, an artefact is a man-made or constructed object which gives information about the culture of its creator and users.” p.47, Artefacts and the All Blacks: Rites, Rituals, Symbols and Stories: Johnson, Martin, Palmer, Watson and Ramsey (2013)

Within the Player Manual that I put together during my time as Director of Rugby at Denstone College, I included numerous things that would play its part in the developing the 1st XV team culture. From a passage that would evoke intrinsic motivations and whether they are ready to rise to the challenge of leaving the jersey in a better place to each player understanding their role in the team from their teammates perspective and sharing their expectations of the other players in their positions, thus creating a mutually agreeable expectations of all the roles in the team.

“…these artefacts have become an integral part of the team culture and are perceived as an important bridge between the team’s history and the present day.” p.44, Artefacts and the All Blacks: Rites, Rituals, Symbols and Stories: Johnson, Martin, Palmer, Watson and Ramsey (2013)

If you can find a way to bring the history of the past to life then it will add more meaning to the values you are trying to instil in your environment and have a powerful impact on the current generation.

“Bower captured the essence of culture when he described it as ‘the way we do things around here.’” p.46, Artefacts and the All Blacks: Rites, Rituals, Symbols and Stories: Johnson, Martin, Palmer, Watson and Ramsey (2013) 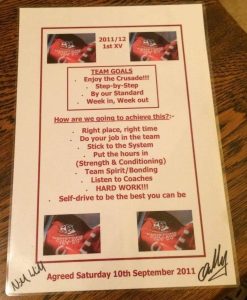 A key part of this process is actually changing the players’ words into actual behaviours on a regular basis otherwise they are just words they say and have no real substance or meaning. The first stage with this is to put their words down on to paper so that they can put them up where they want to and see them on a daily basis. The second stage is to ensure that these words are enforced by the leadership group into actionable behaviours and supported by you the coach otherwise the behaviours you desire will cease to exist.

“Schein (Organisational Culture and Leadership, pp. 23-33) describes artefacts and creations as the tangible elements that one sees, hears and feels about the culture. They are the visible or audible products of language, technology, and creations of style: clothing, manners of address, myths, and stories.” p.46, Artefacts and the All Blacks: Rites, Rituals, Symbols and Stories: Johnson, Martin, Palmer, Watson and Ramsey (2013)

The jersey your players wear and what it represents is a very significant part of the process as well. Every time they see the badge during pre-match motivational videos it would generate an emotional response several hours before kick-off getting them psychologically ready. Every time they pull on the jersey in the changing room will create emotions inside their bodies prepping them physically for the match ahead. Every time a player grabbed the badge on their jersey at a rallying call would heighten the response from his teammates. Over time the badge will bring significant meanings to all the players in their own way.

“Symbols are things that take on meanings that are defined by cultural and social conventions and interactions that are noticed through sight, sound, touch and smell, and are powerful indicators of organisational dynamics.” p.47, Artefacts and the All Blacks: Rites, Rituals, Symbols and Stories: Johnson, Martin, Palmer, Watson and Ramsey (2013) 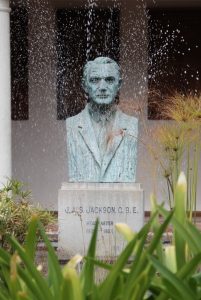 If you can work out a point back in time that connects all your players to the origin of your team then this will significantly impact the power it plays in developing your Team Culture. In Chile I was very fortunate to be able to use the statue of the founder of the school John Jackson which has deep meaning for each player in Old Boys. They spent 14 years in the school and would walk past his statue on a daily basis, be constantly reminded of his presence at important ceremonies in the school as they would take place in the quad where the statue was and they would regularly hear the stories of his important messages and teachings.

“When symbols…are associated with internal states or feelings, their physical presence can also evoke associated emotions and feelings. …this can mean playing to a higher standard because they are wearing the…jersey.” p.47, Artefacts and the All Blacks: Rites, Rituals, Symbols and Stories: Johnson, Martin, Palmer, Watson and Ramsey (2013)

Recently at GAIN XI, hosted by Vern Gambetta at Rice University in Houston, Texas in the USA, my good friend Dan Noble shared his story of and his journey with The Hill Academy from its origin. Sadly at the very beginning in the first year of the academy opening a tragedy happened to one of its players who was killed in a tragic accident and his memory lives on today many years later. Their players play for something far bigger than themselves during their time at The Hill Academy and honour one of their brothers who is no longer with them in a unique way. When players graduate and play Lacrosse in NCAA Colleges throughout America their players wear the number 45 jersey. People outside of the Academy family do not know the story behind players on opposite sides wearing the same No.45 jersey but for me on hearing of this story, it plays a huge part into why The Hill Academy produces the most number of NCAA Division I College Scholarships in North America in Lacrosse.

“Rites and rituals, often symbolic, are manifestations of traditions, values and core assumptions of organization. Through repetition, they become embedded in an individual’s psyche.” p.48, Artefacts and the All Blacks: Rites, Rituals, Symbols and Stories: Johnson, Martin, Palmer, Watson and Ramsey (2013)

At the start of each session I greet my players/pupils with some form of “hello” and things nothing to do with the upcoming coaching/teaching session. I share with you an example I did in Chile: The first pupil to arrive at the front of each line, i.e. the Colour/House, each week I would assign as the “leader” to organise his Colour to sit in a straight line and be quiet. During the early stages I would only communicate with this “leader” empowering him to take ownership of organising his classmates. I would have to regularly coach this “leader” to eventually get the outcome I desired. Here’s the catch… at some point in the future the penny dropped. I could never guess when this moment would occur but one time I would walk around the corner and all the pupils were perfectly in their 4 lines and needing no coaching from myself. Over time we have gone from taking 10 minutes to get the 4 lines in place to 0 minutes. From this point onwards I knew I had them.

“Inkson and Kola (Management: Perspectives for New Zealand, Pearson Education, Auckland, 1995, p.349) define a rite as an activity which participants must endure or complete in order to progress within a culture. It is also an established ceremony or action undertaken by an organization.” p.48, Artefacts and the All Blacks: Rites, Rituals, Symbols and Stories: Johnson, Martin, Palmer, Watson and Ramsey (2013) 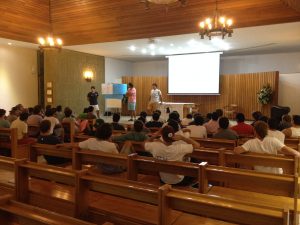 The players themselves driving this part of the process is a key cog in the wheel. I can not emphasise enough how important it is and that the earlier in the stage of the season this is done the quicker you can move on and see your players take ownership of their Team Culture. What people may not realise is though, is that you can not put a time limit on this part of the process. Through experience, the more the players are used to this exercise the less time it takes to get to the end point. So in the beginning when this process is new to players it will seem to take a very long time. Do not rush the players and allow them to get their messages and points across to the rest of the players in the squad. If you do cut them off early then you will lose the very positive and powerful impact this plays and it devalues the whole Player-centred approach. 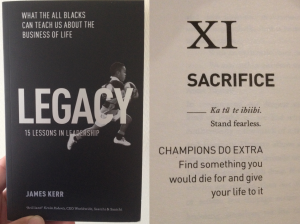 One thought on “HOW Create a Team Culture… Rites, Rituals, Routines and Artefacts”