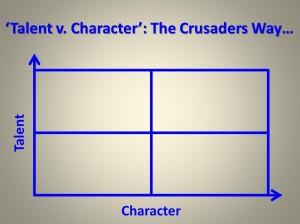 This approach/philosophy came to me during my time with the Canterbury Crusaders during August 2009…in particular my discussion with Matt Sexton, Academy Manager 2005-2011, for the most successful professional rugby franchise in Super Rugby history to date.

The Crusaders Honours Board in Super Rugby:

In 1996 the Crusaders finished bottom of the Super 12 ladder…so what led them to such unprecedented success in the Super Rugby Competition and a change in fortunes…?

On return from my trip to the Southern Hemisphere; from 2009-2013 we applied this principle to the Denstone College 1st XV (Staffordshire, England) and it stood the team in great stead…with an unprecedented run of success never seen at the College dating back to 1899…the first unbeaten season in 43 years…2 unbeaten seasons in 3 years (only the 4th & 5th unbeaten seasons in the history of the College)…with a playing record of P43 W35 D3 L5…PF 1201 PA 361…Tries for 171…Tries against 46…with the fixture card getting tougher each year…an 81% win-rate across 4 seasons.

“The result? An incredible win-rate of just over 86%, and a Rugby World Cup” (James Kerr, Daily Telegraph article ‘The All Blacks guide to being successful (off the field)’: 14th November 2013)

The 2011 World Champions…the All Blacks became the first International team to go undefeated in the professional era in a calendar year…P14 W14…PF 454…PA 239…Tries for 51…Tries against 19…against the best teams the world of rugby has to offer…”Better People Make Better All Blacks” is one of their mantras.

“The All Blacks select on character as well as talent, which means some of New Zealand’s most promising players never pull on the black jersey – considered dickheads, their inclusion would be detrimental to the ‘whanau’ (meaning ‘extended family’ in Maori)”

(James Kerr, Daily Telegraph article ‘The All Blacks guide to being successful (off the field)’: 14th November 2013)

James Kerr’s Telegraph article on ‘The All Blacks guide to being successful off the field’ can be found here:-

The Chiefs Super Rugby franchise won back-to-back Super Rugby titles in 2012 and 2013 after so many years of being one of the also-ran New Zealand rugby franchises. The coaches empowered the ‘right’ players with the ‘right’ mindset…They created their own haka…they extended their logo and gave ‘their’ Chief legs…they out-reached to all parts of their community…

Now a long way from ‘home’…after 12 months of intense rugby in the legs…and travelling to and fro all round the world to play…with 50,000 passionate fans against you…and 15 highly committed, physical players ready to smash you (with their own chance to make history and beat the All Blacks for the first time ever)…with 19 seconds left on the game clock…you are 62m from the Irish try line in your own half…and 17 points to 22 points down…an unbeaten record on the line…with a chance to make history in the professional era…you have a penalty awarded to you…needing a try to at least draw…with the conversion to create the victory…who would you have in your team…?

The link to the final try of the 2013 All Blacks season against Ireland can be viewed here:- 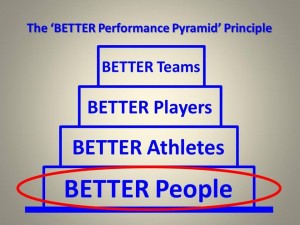 Over the last 2 years I have created and developed the ‘BETTER Performance Pyramid’.

How do you create a BETTER Team…?

The first question to ask yourself is: What makes up a BETTER team…?

BETTER Players make a BETTER Team…as they are more skillful…have a BETTER understanding of the game…and train BETTER.

Then ask yourself this question: What makes BETTER Players…?

Then what makes BETTER Athletes…?

This concept was very much a part of arguably the most successful sports team EVER and of the teachings of arguably the most successful coach EVER: The UCLA College Basketball team under the tutelage of Coach John Wooden. The Bruins won 10 NCAA National Championships in 12 years from 1964 to 1975, including 7 straight from 1967 to 1973, of which 4 were perfect seasons in 1964, 1967, 1972 and 1973. including an 88 game winning streak. 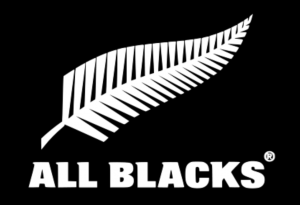 This concept is also at the very heart of the most successful professional sports team EVER: The New Zealand All Blacks: ”BETTER People make BETTER All Blacks”. The All Blacks have won 85% of matches they have ever played and they have a win rate of over 75% in all Test Matches. From 2004 to 2014 they have P145 W126 D2 L17 recording an 87% win rate, they have won the Tri-Nations/The Rugby Championship 8 out of 11 times and they have been the most consistently ranked No.1 team in the IRB/World Rugby Rankings having held the No.1 ranking for more than 80% of the time during this period, and they were crowned World Champions in 2011.