Key questions to ask yourself:-

How BIG is the area of play that your players play in, in a real game…?

What area would you use during a ‘drill’ session…?

What area would you use during a ‘TGfU’ session…?

How much time is taken up by skills in a game…? 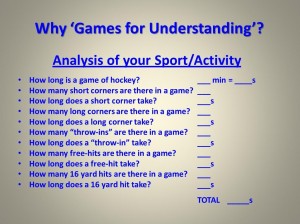 How long are you attacking and defending for…? 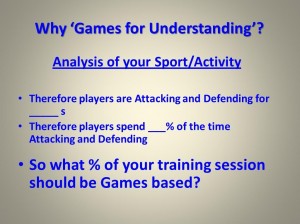 How long is the ball in play for during a real game…? 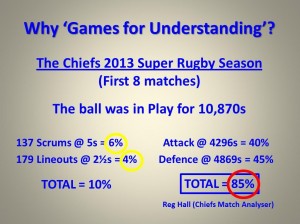 So what % of your training sessions should be games based, i.e. Using ‘TGfU’…?

So do the typical ‘drills’ cater for all the answers these questions pose…?

What does the evidence say…?

“(Graham, 1971; Stephenson, 1972) Found that…all children could benefit from an approach such as this; it was quite apparent that teaching a class skills that many of them would never achieve and some had already mastered was not the equal of a modified games approach which allowed ‘the game’ to develop and, what is more, allowed the teacher to assist individuals and small groups with their own technical deficiencies. (p.5)”

“David Bunker and Rod Thorpe: Observation of present games teaching shows at best, a series of highly structured lessons leaning heavily on the teaching of techniques, or at worst lessons which rely on the children themselves to sustain interest in the game…these approaches have led to:

“…traditional methods have tended to concentrate on specific motor responses (techniques) and have failed to take account of the contextual nature of games…It is our belief that if the emphasis is shifted to tactical considerations in a game children will recognise that games can be interesting and enjoyable as they are helped and encouraged to make correct decisions based upon tactical awareness. (p.7)”

“…an approach to teaching games which is based on the premise that if we can help children to ‘understand’ games and to reduce the importance attached to the teaching of techniques in strictly controlled situations then the joy and satisfaction of games will be open to children of all abilities. (p.25)”

“By playing purposeful games, athletes enjoy training and their intrinsic motivation is increased which in turn enhances their desire to learn and encourages them to continue participating in sport… “TGfU offers a more exciting approach to motivate students and to enable them to learn and enjoy themselves.” (Chapter 2)”

“TGfU enables players to learn about the game and practise the technique within the context of a game rather than separate from it. Learning in context provides a better understanding of the game as well as many opportunities for decision making, a skill that is consistently considered desirable for athletes. (Chapter 2)”

Game Sense encourages players to understand and appreciate the game…it enables them to make informed decisions, take ownership of their learning and exercise choice and control over how they play the game. (p.195)”

“The games in TGfU are a key to designing training sessions. Instead of using traditional practice drills, which have no real relevance to the actual game, Wayne tries to design games that match the purpose of a particular drill. (p.196)”

Dean Holden offers some really good Blog articles and links on his GetSportIQ website in the TGfU category (http://www.getsportiq.com/category/tgfu/).

Going back to the questions in the opening section:-

In my opinion the best ‘Method of Coaching’ that provides the solution to all these answers is ‘TGfU’.

‘TGfU’ provides an environment that has the player at the centre of the learning and development, i.e. ‘Player-Centred Coaching’, and covers many different areas and aspects all at the same time. 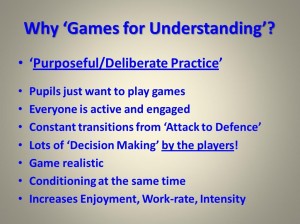 Finally, you will no longer hear from your players “when can we play a game?” as they will be playing games pretty much all the time during EVERY teaching/training session throughout their time with you. 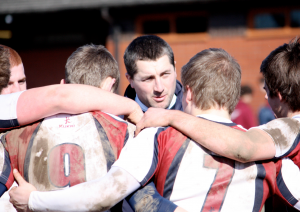 Nick has been using ‘Teaching Games for Understanding’ (‘TGfU’) since 1999 when he first started rugby coaching at the age of 19. He has gained knowledge and understanding about ‘TGfU’ over the years through various mediums, e.g. books, Blogs, articles, coaching conferences and seminars, with his coaching mentor Brian Ashton (2003 World Cup Winning England Attack Coach and 2007 World Cup Runners-up England Head Coach) playing a big part in this, starting from the time when Brian coached Nick while playing for England U’19 in 1999 during the Junior World Cup and then firsthand coaching alongside Brian during Brian’s Kukri Rugby Academy camps at RGS Lancaster during the summer of 2012. 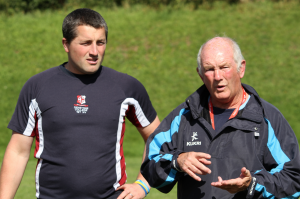 Nick has gained experience using ‘TGfU’ during his 13 years Physical Education teaching career in Badminton, Basketball, Cricket, Handball, Hockey, Softball, and Tennis, and his 16 years rugby coaching career to date. Nick had a very successful period of applying ‘TGfU’ while he was the Director of Rugby at Denstone College in Staffordshire, England, from 2005 to 2013. Nick is now currently the Director of Rugby at The Grange School in Santiago, Chile, which is a mixed Independent Day School of around 2000 pupils from the age of 5 to 18 years old and rugby coach at the Old Grangonian Rugby Club as well. He teaches and coaches from 8 year olds all the way up to adults, both males and females, and his main ‘Method of Teaching/Coaching’ is using ‘TGfU’.